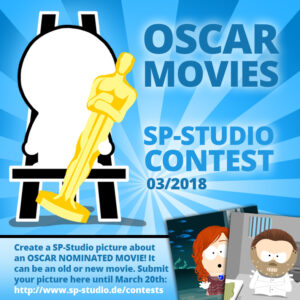 Did you watch the Academy Awards? Let’s create some creative SP-Studio artworks inspired by Oscar nominated movies! Pick any movie you like, the year and category of the nominations do not matter. But pictures about movies which were never nominated for an Oscars will be disqualified. You can use the lists on Wikipedia to check if a movie counts. Here are those for the Best Picture and Best Animated Picture categories. Please submit your SP-Studio picture for the Oscar contest on the CONTEST PAGE until March 20th.

The last contest about the topic WINTER was won by Art Vandelay and Dottie Holder. Congratulations! The winners can make a wish for a SP-Studio update. You can see the Top Five of past contests in the HALL OF FAME.