Use this thread to discuss all movies in the new DC Extended Universe (Suicide Squad, Wonder Woman, Aquaman, etc.)...

Anyway, the main reason I'm posting this is because of the first image of Jared Leto as the Joker in the Suicide Squad...

So, for those who haven't seen it yet...

I still remember the outrage when Heath Ledger was presented as the new Joker, and in the end people loved him. So I don't care much about the image... right now many people seem to judge it way too hard. If the movie is good and Jared Leto fits the role this is what counts. It might look a little bit like "we try so hard to be cool", but at least they try something different.

Is this the first image for the movie which was published? If the whole style of the movie is presented this way this might be interesting. I liked "Sin City" for its over the top comic book look. And the dark Batman look has been done a couple of times now. I would love to see a colorful, crazy "Suicide Squad" movie that actually feels like a comic and goes further with this than Marvel.

(...this posting was brought to you by somebody who has not read any DC comic book ever

Someone edited the tattoos out and it looks a lot better... 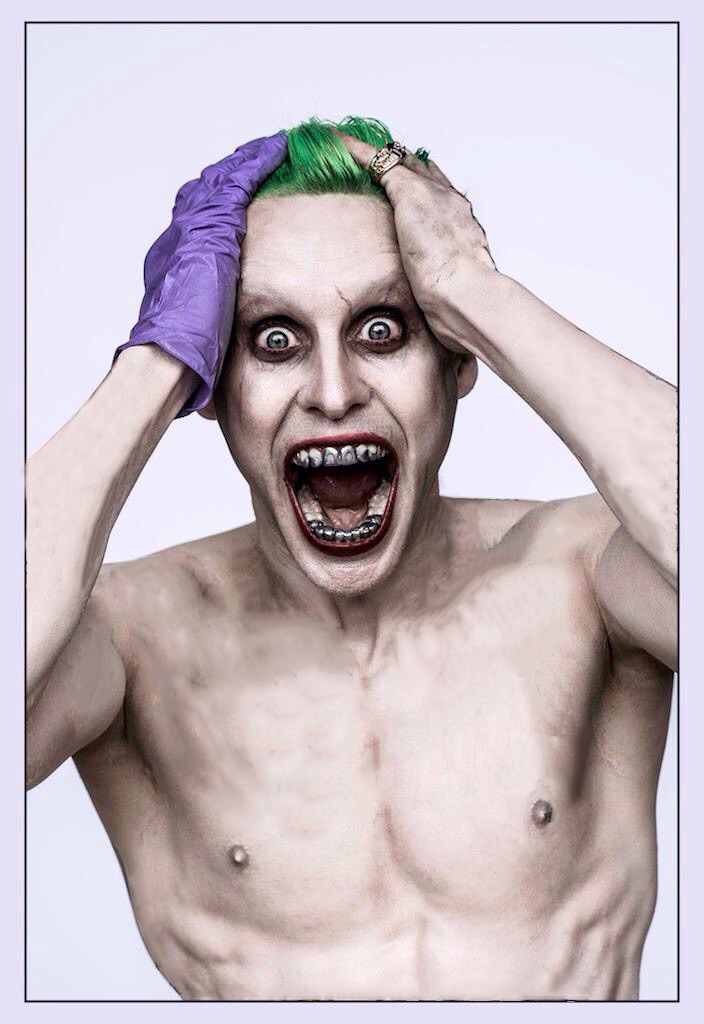 Yeah... it works better in the dark

I love the new Batsuit, it's in my opinion, the best batsuit in any Batman film...

A bit late, but it turns out

My only complaints would be the aforementioned tattoos and the fact that Deadshot (Will Smith) will most likely keep his mask off for most of the film because Will Smith is a famous actor...

Oh and THAT BvS trailer is bone-chilling...absolutely incredible...

I am so glad Robin will be in this universe...
I am not sold on Will Smith playing Deadshot, as he always plays the same character...

But I hope that rumour that the Joker lobotomises Harleen and turns her into Harley Quinn isn't true, the fact that she made the choice is what makes her character.

Well... Suicide Squad was a poorly edited piece of shit...

Casting was overall pretty good:
Margot Robbie brought Harley to screen perfectly, even if they portrayed Joker and Harley as equals, I am gonna wait and see if that sticks, most of their relationship was from her perspective...
Captain Boomerang was the role Jai Courtney was born to play. As a lifelong Flash fan he was definitely my favourite part of the movie.
El Diablo was done well, with Jay Hernandez bringing his all to this fairly minor comic character.
Most of the other characters, including Amanda Waller, Katana, Jonny Frost and Killer Croc, were cast well, even if they were under utilised...

A few twists and turns of the plot were genuinely not expected, including who the squad were trying to rescue...

The Batman cameos and heavy easter eggs were done well.

What happened to the squad at the end was great.

The score was alright..

Is this the 9th comic book movie to feature the glowing sky-beam of death?

This movie was poorly directed and the editing was all over the place...

Jared Leto I am sorry for what happened to your take on the most iconic supervillain...
One, he was barely in it so no one could get to know him; he was relegated to a supporting character to Harley...
Two, the makeup and costume gave him no favours, nor did the hammy writing, trying to imitate Heath Ledger...

Will Smith was just Will Smith... He didn't have the charm nor the death wish which makes Deadshot a notable character, pull his relationship with his daughter was an afterthought...

Does Task Force X have a no-mask policy of something! None of the characters had their masks on for anything other than a reference if at all!

Rick Flag, Enchantress, Slipknot, and Katana were so forgettable..

Killer Croc was turned from one of Batman's most memorable foes into a racist, one note, Drax The Destroyer knock-off.

David Ayer should not be given any more DC properties, especially the Gotham City Sirens movie in development. His direction leads to bland, offensive characters who are just there to fill gaps.

To be honest though, with the right editors there is a decent movie in there. Warner Bros did exactly what they did with BVS and choked at the last minute, quickly re-edited it to match with test screenings... but with this they got a trailer cutting company to recut the movie... need I say more...